Home » About ECORD » About us » ECORD-Net 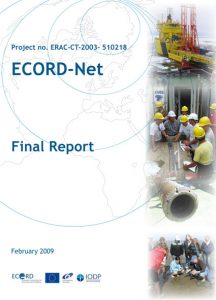 The ECORD-Net project (no. ERA-CT-203-510218) was funded under the 6th Framework Programme with the main objectives of developing the structure and mechanisms for coordinating and funding ocean drilling research in Europe, and joining the international program IODP (Integrated Ocean Drilling Program) as a single European member. IODP is an international 10-year project (2003-2013) in which scientific ocean drilling is being undertaken to understand the Global Earth System. Being a member of IODP offers access to address a variety of drilling platforms to obtain records of past climate changes, study bio-diversity in sub sea-floor systems, establish sea-floor laboratories for the study of natural hazards in submarine systems and discover new energy resources. The project, coordinated by INSU-CNRS (France), initially included 7 work packages and 9 partners, and was funded for 48 months (December 2003 to November 2007) at the level of €2,238,087. Subsequently, a workpackage and two partners were added and an additional funding of €400,000 was allocated, for a total budget of €2,638,087. The duration was extended to 57 months (August 2008).

At the end of ECORD-Net, the objectives of the project have been fully met. ECORD (European Consortium for Ocean Research Drilling) is up and running and has proved its efficiency, and the European Research area in ocean drilling is now built. ECORD can be considered as a very successful example of integration at the European level to increase the visibility and strength of Europe in an international programme. 17 countries (Austria, Belgium, Canada, Denmark, Finland, France, Germany, Iceland, Ireland, Italy, Netherlands, Norway, Portugal, Spain, Sweden Switzerland and UK) have signed the ECORD MoU to join ECORD, and ECORD has joined IODP as a single European member. The influence of ECORD and its intellectual contribution are well acknowledged within IODP by the Lead Agencies. The ECORD Science Operator (ESO) has set up a model to implement mission-specific platforms (MSPs) in areas inaccessible to the other drillships of IODP (the JOIDES Resolution and the Chikyu), opening new fields of research in shallow waters and ice covered areas. The ECORD Science Support and Advisory Committee (ESSAC) has been very active in leading and organising scientific ocean drilling in Europe. For the future, a particularly important achievement of ECORD-Net has been the development of the “Deep Sea Frontier” initiative, for a better integration of ocean drilling with other approaches that aim at understanding processes occurring at the deep seafloor.

ERA-NET scheme is a highly innovative component of the European Union’s Sixth Research Framework Programme (2002 – 2008), aimed at integrating and strengthening the European Research Area. To overcome the traditional fragmentation of research efforts in the European Union, ERA-NETs are expected, through better coordination and cooperation, to lead to collaboration of major significance, including the strategic planning and design of joint research programmes, the reciprocal opening of national research programmes to researchers from other member countries, the pooling of resources and the launch of fully transnational programmes. A total of €148 million has been allocated to the ERA-NET scheme for the life of FP6.
The first open call for proposals received an extremely positive initial response. The ECORD-net proposal was highly ranked by the EC and, after negotiations, the European Community contract No ERAC-CT-2003-510218 entered into force on 12 December 2003.