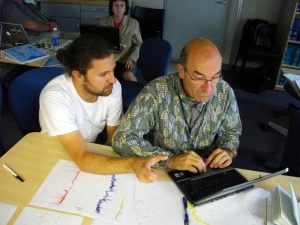 Rockers Helder Pereira and Jean-Luc Bérenguer during School of Rock 2009.

IODP Schools of Rock are educational workshops during which teachers become familiar with the International Ocean Discovery Program (IODP), scientific drilling and earth science through interactions with IODP scientists and Education/Outreach Officers. To achieve that objective, the workhsop include science presentations and practical hands-on activities conducted by the participants. This initiative was created in 2005 by the IODP US Implementing Organization (IODP-USIO) as an expedition designed for earth and science teachers onboard the JOIDES Resolution during a transit of the drillship.

In 2014,  ECORD Teachers who sailed onboard the JOIDES Resolution as Education/Outreach Officers take intiative to organise an educational workshop in their home country to share their at-sea experience and to teach their colleagues how to bring IODP science into the classroom. Since 2015, the workshop is named “ECORD School of Rock” as it drew its inspiration from the US School of Rock.

US School of Rock

School of Rock workshops are organised by the US Science Support Program (USSSP) and occur once a year, usually during a transit or tie-up period for the vessel  JOIDES Resolution
Contact: Sharon Cooper: scooper@ldeo.columbia.edu

2018 School of Rock: Te Kura Kohatu, 5-13 July 2018, Auckand, New Zealand. The workshop focuses on Pacific Rim geology and the science research of the JOIDES Resolution and is jointly organised by the USSSP and ANZIC – more information about the programme and application.

In April 2014, an ECORD/IODP workshop for teachers was held in France as a two- or three-day long workshop with lectures given by scientists and practical hands-on sessions developped and tested by scientists and educators who sailed on IODP drillships (JOIDES Resolution). ECORD recognised this pilot workshop as a major educational contribution to  educational objectives of the programme and supported that it should be shared and developped accross all ECORD countries as the “ECORD School of Rock”. 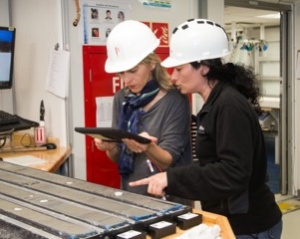 2018 ECORD School of Rock: “Comprendere il Sistema Climatico attraverso i sedimenti marini profondi” – 24-27 July, Pavia, Italy (Organisers: Claudia Lupi, Angelo Camerlenghi and Alessia Cicconi).
The topic of the workshop is the study  of Quaternary Climate Change through ocean sediments. About 20 teachers from all over Italy will participate in the ECORD School of Rock 2018, which consists of lectures and hands on activites and  also include a discussion on how civil society can and must face the climate change.
More information on IODP-Italia and ECORD SOR 2018 websites 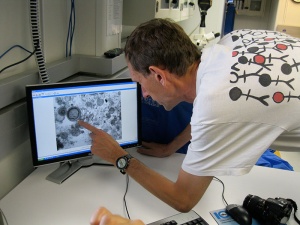 ECORD participants in the Schools of Rock onboard the JOIDES Resolution