The ECORD Science Operator (ESO) is the Implementing Organisation for mission-specific platform (MSP) expeditions. ESO is a consortium of European scientific institutions formed to undertake MSP expeditions for ECORD on behalf of the Integrated Ocean Drilling Program (2003-2013) and the International Ocean Discovery Program launched in October 2013.

To date, ESO has completed eight MSP operations, five expeditions from 2003-2013 and three expeditions since 2014. Expedition 381 to the Gulf of Corinth was completed on 28 February 2018.  One expedition to the polar region is planned before the end of the IODP in 2023 – see MSP schedule.

ESO comprises the British Geological Survey (BGS), the MARUM, University of Bremen and the European Petrophysics Consortium (EPC). BGS acts as consortium coordinator responsible for overall ESO management under a contract from EMA as designated by the ECORD Council. The EPC is contracted to carry out logging and petrophysical activities. The University of Bremen is contracted to carry out curation and data management tasks. 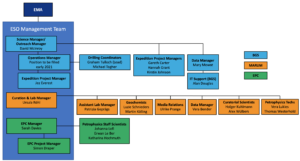 More information about the mandate, tasks and membership of ESO can be found in the ECORD Memorandum of Understanding.